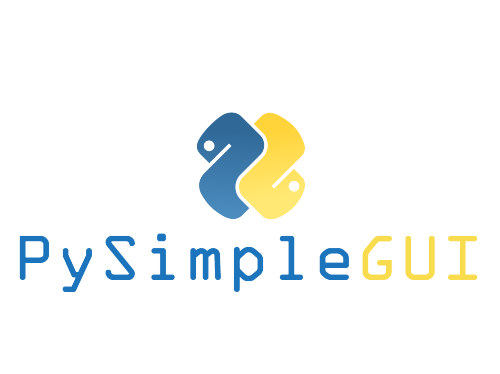 Add GUIs to your programs and scripts easily with PySimpleGUI

Dec 2019 - This tutorial is out of date and being updated!

Please don't use the code found in this tutorial as a starting point in your coding. The coding conventions and design patterns have changed.

The Cookbook is very easy to use to get started. It has much of the same material that's presented here, except it is more up to date.

Few people run Python programs by double clicking the .py file as if it were a .exe file. When a typical user (non-programmer types) double clicks an exe file, they expect it to pop open with a window they can interact with. Writing GUIs is of course possible using tkinter, but it's out of reach for some Python users.

There seems to be a gap in the ability to add a GUI onto a Python program/script. Complete beginners are left using only the command line and many advanced programmers don't want to take the time required to code up a GUI.

There is no shortage of GUI frameworks for Python. tkinter, WxPython, Qt, Kivy are a few of the packages commonly mentioned. In addition, there are number of simplified GUI packages that wrap one of the GUI frameworks. These include EasyGUI, PyGUI, Pyforms, ... These solutions involve templates of windows or other high-level layouts. They don't offer a general, build the GUI you have in your head, solution.

The problem is that beginners (those with experience of less than 6 weeks) are not capable of learning even the simplest of the GUI Frameworks. That leaves the wrapper-packages. Users will likely find it difficult or impossible to build a custom GUI layout using the easier wrapper packages.

PySimpleGUI attempts to address these GUI challenges by providing a simple to understand, easy to write. Python friendly interface to GUIs that can be easily customized. Complex GUIs are often less than 20 lines of code when PySimpleGUI is used.

What makes PySimpleGUI superior for newcomers is that the package contains the majority of the code that the user is normally expected to write. Button callbacks are handled by PySimpleGUI, not the user's code. Beginners struggle to grasp the concept of a function, expecting them to understand a call-back function in the first few weeks is a stretch.

With some GUIs arranging the GUI Widgets often requires several lines of code.... at least one or two lines per widget. PySimpleGUI users define their Window using rows of widgets where the widgets are configured in place. In one line of code you are both defailing the location of your widget, but also its configuration. There is no concept of a pack nor a grid system needed to layout a GUI Window.

Finally, PySimpleGUI leverages the Python language constructs in clever ways that shortens the amount of code and returns the GUI data in a straightforward manner. Results are returned as a simple list or a dictionary.

What is a GUI?

Most GUIs do two things.... they present and collect information from the user. From a programmer's viewpoint a GUI that collects information, like a window, could be summed up as a function call that looks like this:

What's expected from most GUIs is the button that was clicked (OK, cancel, save, yes, no, etc), and the values that were input by the user. The essence of a GUI can be boiled down into a single line of code.... show the GUI, get the values in the window, return events that happen and the values to the user.

This is exactly how PySimpleGUI works. When the call is made to display the GUI, execution does not return (i.e. it blocks) until a button is clicked or some other "event" happens in the window.

Because things can happen in a window other than button clicks (closing the window with an X is one) the above line of code is written as:

When is PySimpleGUI useful? Immediately, anytime you've got a GUI need. It will take under 5 minutes for you to create and try your GUI. With those kinds of times, what do you have to lose trying it?

The best way to go about making your GUI in under 5 minutes is to copy one of the GUIs from the PySimpleGUI Cookbook. Follow these steps:

Let's look at the first recipe from the book

It's a reasonably sized window.

If you only need to collect a few values and they're all basically strings, then you would copy this recipe and modify it to suit your needs.

If you find a Recipe similar to your project. You may be able to modify the code within 5 minutes in order to get to your layout, assuming you've got a straightforward layout.

Widgets are called Elements in PySimpleGUI. This list of Elements are spelled exactly as you would type it into your Python code.

You can also have short-cut Elements. There are 2 types of shortcuts. One is simply other names for the exact same element (e.g. T instead of Text). The second type configures an Element with particular setting, sparing the programmer from specifying all of the parameters (e.g. Submit is a button with the text "Submit" on it).

A number of common buttons have been implemented as shortcuts. These include:

The more generic button functions, that are also shortcuts

These are all of the GUI Widgets you have to choose from. If it's not in this list, it doesn't go in your window layout. (Maybe... unless there's been an update with more features and this tutorial wasn't updated)

The stuff that tends not to change in GUIs are the calls that setup and show the Window. It's the layout of the Elements that changes from one program to another. This is the code from above with the layout removed:

The flow for most GUIs is:
* Create the window object
* Define GUI as a list of lists
* Show the GUI and get results

Some windows act more like Windows programs. These windows have an "Event Loop". Please see the readme for more info on these kinds of windows (Persistent windows)

These are line for line what you see in design pattern above.

To create your custom GUI, first break your window down into "rows". You'll be defining your window one row at a time. Then for each for, you'll be placing one Element after another, working from left to right.

The layout produced this window:

Once you have your layout complete and you've copied over the lines of code that setup and show the window, it's time to look at how to display the window and get the values from the user.

First get a window and display it.
window = sg.Window('Simple data entry window').Layout(layout)

Then read the window to get the button clicked and values.:

windows return 2 values, the text of the button that was clicked and a list of values the user entered into the window. More advanced windows return the values as a dictionary of values,

If the example window was displayed and the user did nothing other than click the OK button, then the results would have been:

Checkbox Elements return a value of True/False. Because these checkboxes defaulted to unchecked, the values returned were both False.

Once you have the values from the GUI it would be nice to check what values are in the variables. Rather than print them out using a print statement, let's stick with the GUI idea and output to a window.

PySimpleGUI has a number of Popup Windows to choose from. The data passed to the Popup will be displayed in a window. The function takes any number of arguments, just like a print call would. Simply pass in all the variables you would like to see in the call.

The most-commonly used display window is the Popup. To display the results of the previous example, one would write:

Putting It All Together

Now that you know the basics, let's put together a window that contains as many PySimpleGUI's elements as possible. Also, just to give it a nice look, we'll change the "look and feel" to a green and tan color scheme.

That may seem like a lot of code, but try coding this same GUI layout using any other GUI framework and it will be lengthier and what you see here.... by a WIDE margin. 10's of times longer. 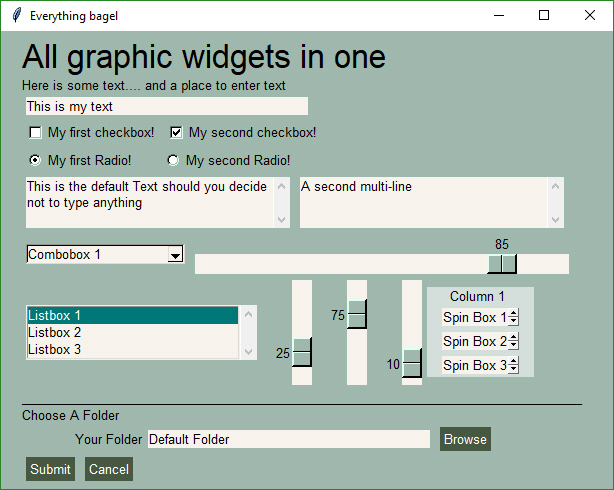 The last line of code opens a message box. This is how it looks:

Each parameter to the message box call is displayed on a new line. There are actually 2 lines of text in the message box. The second line is very long and wrapped a number of times

Take a moment and pair up the results values with the GUI to get an understanding of how results are created and returned.

Adding a GUI to Your Program or Script

This kind of logic is all that's needed:

Copy one of the Recipes from the Cookbook and run it. See if it resembles something you would like to build:
PySimpleGUI Cookbook

Have some fun! Spice up the scripts you're tired of running by hand. Spend 5 or 10 minutes playing with the demo scripts. You may find one already exists that does exactly what you need. If not, you will find it's 'simple' to create your own. If you really get lost, you've only invested 10 minutes.

If on a Raspberry Pi or Linux, may need to do this instead:

Works on all systems that run tkinter, including the Raspberry Pi

From here you can search these documents. Enter your search terms below.